Authored by Dr. Eric J. Westby in Issue #6.4 of The Catechetical Review 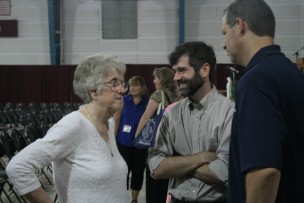 Few people impact us on such a deep level that it changes our life journey. For me, that influence happened in 1994. In August of that year, Barbara Morgan began the catechetics program at Franciscan University of Steubenville. I had the great blessing of being there when it started. She became a spiritual mother to me and infused in me a deep sense of purpose. In this article, I would like to share a few ways in which she did that with me.

Barbara’s significance in my life was unparalleled, and I knew it would be profound as soon as I encountered her. At that first class, in the course entitled “Content and Curriculum,” I sat in the front, which is usually not the case for me (give me the back row, please). Since I showed up to the MA program with almost six years of parish youth ministry experience, I wanted to pay attention, since this course would be geared directly to pastoral situations. Little did I know what I was in for. As much as I loved the study of theology in all its disciplines, when Barbara began to teach catechetics, I was moved at a far greater level than any subject I had studied before. Through her, God revealed my vocation and identity to me and, as a result, I could never be the same person.

After her first class, I could not contain myself. I followed her to her office and had to tell her my plans for a teen Confirmation resource. I’m sure I sounded like a babbling fool. What was happening was not about my ideas regarding Confirmation; in a real way all my grandiose plans and projects were secondary. The underlying reason I had to seek her out was because I had had an unprecedented encounter with the Lord. I was reacting with unabated joy to a calling and could not contain myself.

And that was just the first class.

Throughout her classes, Barbara connected me to a pastoral context, and as I listened to her, my zeal for that needed work increased. What attracted me to her words was not just that she was speaking to my ministry experience. Her class was not the first pastoral course I had ever attended—over the previous ten years I had been to many workshops, conferences, and seminars. Barbara’s classes were different. She loved to teach about Christian conversion and the joy it would bring her to catechize others. She had such a passion for the Church’s mission, inspired by a deep, personal love for the Lord, for his Church, and for his teachings that it permeated her teachings, which were thought-provoking, rooted in the magisterium, and seeking to foster conversion.

Barbara taught with authority—and her teaching had authority—and this is what drew me to her. This authority was genuine. It was rooted in her baptism and a deep calling from the Lord. She had this call to be a catechist since she was young. Her authority came from her experience as a woman and a catechist. It manifested itself with great zeal, built on her natural intellect and ability to communicate. She could analyze situations and see the deep picture, the movement of the Holy Spirit in the situation.

Love for Her Students

In a real way, Barbara’s authority was directed to us, her students. Her authority supported my vocation, triggering in me a passion and yearning to want to spread the teachings of the Church and bring others to faith in Christ. She loved us deeply, in a manner that was maternal. She will always be my second mom. I thought I was her special one, and I was. She was nothing but affirming to me. She gave me a future—a low-paying one, but a future nonetheless. Over time, I talked to other graduates. They thought they were her special ones. I realized that Barbara made us all feel uniquely important. Barbara told each of us that we were invaluable to the recovery of contemporary catechetics not only in this country but throughout the world.

Alongside Barbara’s influence, her husband Gary deserves recognition. I saw nothing but patience and support from him. I know he is not St. Joseph, but he is pretty close. He is a man with a deep sense of the Lord’s providence, and he saw clearly that the Lord was behind Barbara’s work.

Barbara and Gary always made me feel welcome—not just as a dinner guest but as family. Their home was a place of welcome and warmth. They even hosted a course in their home, with the great Dr. Rhonda Chervin.

She displayed great confidence in us, her students. Her joy was not in her accomplishments, it was in us growing up and getting out into the ecclesiastical world. There were times that she would speak about catechetical issues facing the Church that were so far over my head that I could barely understand her. But this was all part of preparing us to engage the difficult challenges and issues. When I finally graduated in 1997, she said, “This class is going to change the Church.” Even though she said this, working in the Church can seem like being fed to the lions. Barbara’s zeal and her incisive way of engaging the issues has helped us to persevere through the many challenging situations of parish and diocesan life.

More to Her Than We Knew

We were only part of her sphere of influence. She was a true parish catechetical leader and loved parish life. However, she was a global catechist, with a pulse on catechetics throughout the world. Barbara was a visionary, for she understood Church issues that very few people were grasping. She networked internationally and inspired “catechetical friendship” with institutions from around the world. Barbara wanted us to treat Christ’s spouse, the Church, with profound respect and dignity, and she instilled in us a love for the Church’s structures. She impressed upon us, over and over again, the need to respect ecclesiastical authority and not have theological pride when we worked with pastors and bishops. She loved them and wanted us to respect their authority.

Providentially, she began the catechetics program at the same time the Catechism was published. She formed catechetical leaders that helped usher in the promulgation of the Catechism throughout the Church and helped to pass on the Deposit of Faith after a post-Conciliar period of widespread doctrinal confusion. She described this confusion as a “wall” that separated the faithful from the Lord. She thought that the first generation after Vatican II could not proclaim Christ because of these walls. She thought our generation (I’m now in my mid-50s) would break holes in that wall, and that the next generation, the current generation of young leaders in the Church, those in their 20s and 30s, would break down that wall. That remains to be seen.

The last time I saw Barbara was in the Summer of 2018. I had just come from the 2018
St. John Bosco Conference (one of her amazing creations) and had given a keynote address. I wanted to talk to her about my PhD dissertation, which I had completed two years before that, on the role of the priest in catechesis. As I started talking, all she wanted to do was listen. Her comments were few, but her smiles were many. She recognized that I had written on a topic that was not only catechetical but that had far-reaching implications for the future of the Church.

As I reflect on her influence, Barbara, for me, is a paradigm of female leadership in the Church. She has left us a true maternal legacy that inspired so many to great hope and confidence in the Lord. She entrusted to us an important future, one of fidelity to the Lord’s teaching and a passion for its proclamation. She encouraged us to study hard, know the content of the Faith, pursue doctoral studies, and seek jobs of influence. She proposed to us a vision that would strengthen the Church. She was a powerhouse of inspiration, and as a woman in the Church, her great power and influence in the Church was in her fidelity and proclamation.

Barbara’s legacy for us is one of hope. She helped improve and renew a catechetical landscape that was challenging, at best, in the mid-1990s. Barbara spoke with authority, she built us up with positive words, and she made us fall in love with the Lord’s catechetical mission. She encouraged us to give our lives to it, and so many have. Thank you, Barbara. May we have the hope and perseverance to continue what you started and bring it to fruition.

Dr. Eric J. Westby is an Assistant Professor of Theology and Catechetics at Franciscan University. He was the first student to complete the Catechetics Specialization under Barbara. He and his wife Nikki live in Phoenix, AZ.

To learn more about the legacy of Professor Barbara Morgan, go to www.FranciscanAtHome.com/resources, select Category, then Barbara Morgan Legacy Section from the drop-down menu, then Apply. Consider attending the annual St. John Bosco Conference for Evangelization and Catechesis that Barbara founded. It will be held July 12-15, 2021.

This article originally appeared on pages 41-42 of the printed edition.