Authored by Dr. James Pauley in Issue #5.4 of Catechetical Review 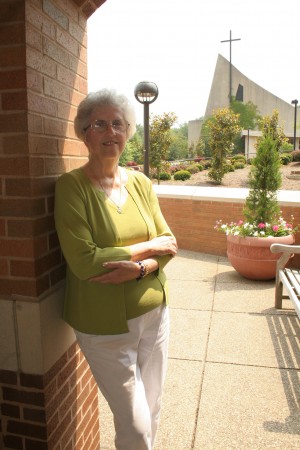 What is holiness? In our lead article, Dr. John Cavadini describes holiness as the Second Vatican Council did, as “the perfection of love.”[1]

How can we begin to imagine love’s perfection? Considered abstractly, we cannot wrap our minds around it. We need to somehow see it, if we are to understand the aim above every other in the Christian life. For this, we look to the Trinity, and to Jesus, Holiness Incarnate. In every page of the Gospels, divine, self-sacrificing love emerges in its splendor.

We also need to see holiness reflected in people who began life under the shadow of original sin. Saints are not born with halos but grow in love’s perfection, as they cooperate more and more with transforming grace. Holiness takes form when we see Francis embracing the leper, Thomas More’s good humor at his execution, and Catherine of Siena confronting Pope Gregory XI.

I have met no greater model of holiness in a catechist than Prof. Barbara Morgan. Barbara founded the Catechetics program at Franciscan University in 1994. She had been an “in the trenches” catechist for over forty years when she moved to Steubenville with her husband Gary. She decided, in the decade she could give, that she would invest herself as fully as she could in the students God would send her.

In 1995, I was one of those students. When I think about my classes and conversations with Barbara, that oft-quoted line from 1 Thessalonians comes to mind: “With such affection for you, we were determined to share with you not only the gospel of God, but our very selves as well....” She shared the Gospel and she shared herself. For instance, Barbara printed her home phone number on her syllabi, with the notation that 11pm was the latest we were permitted to call with questions. 11pm! I remember studying for an exam at 10:30pm and having a question, but not daring to actually put that syllabus to the test. However, the next night I did call at 6:30, and it was clear to me that she was for real and not at all put out by my call.

In my favorite class with her, I began to see Catholic doctrine as being, in its essence, organically unified with the proclamation of the Good News. Over and over again, the kerygma rang out in her class, and I felt myself more and more brought into its mystery. Gladness welled up in me, that I was loved like this by God!

Christine Shanks has never forgotten an experience working on Barbara’s RCIA team: “She had each of us look into her eyes and pledge to pray for our catechumen or candidate. Since then, I’ve tried to be that prayer warrior for others in my life. When my son Xavier’s first grade teacher asked if I would pray daily, by name for each student in the class, I saw Barbara’s face and heard her teaching; and I smiled with a ‘Yes. I will do that.’”

Jim Beckman was the youth minister in Columbine at the time of the school shootings: “I was in Steubenville for an intensive summer session. Barbara was sick that summer, teaching sitting down because of her health. One day, Barbara jumped out of her chair, ‘Jim Beckman, please tell me you’re telling those kids about heaven! Those Columbine students, they need to hear that more than anything!’ I think everyone in the room jumped out of their seats too. Her spark of passion and life was jarring. I hadn’t been telling them about heaven, and I needed to be. That class made all the difference when I went back home; and as I look back, it might have been a turning point for our whole community.”

Marc Cardaronella describes Barbara’s investment in her students: “The most important thing for her was replicating herself, her skills, in others. She was too busy doing that to write, or speak to large crowds, or make herself more widely known. She poured herself into her students, getting to know them personally, helping them, advising them long after they graduated, and giving them everything she had. She knew the best way to have a lasting impact was to invest deeply in a few faithful people who could carry her work and pass it on to others. She worked to the end influencing others.”

In 2018, Barbara had her years-long labor of love for the Church published: Echoing the Mystery (Lumen Ecclesiae Press). Barbara died on September 3, the Feast of St. Gregory the Great, after many days surrounded by her loving husband, family members, and friends. Perhaps Dr. Carole Brown has put it best: “Professor Barbara Morgan effectively reshaped catechesis in the United States and changed the destiny of many people she never met. May she rest in peace.”

Dr. James Pauley is Professor of Theology and Catechetics at Franciscan University of Steubenville.

Applied Theology of the Body: The Difference between Contraception and Natural Family Planning
By Dr. Donald P. Asci
St. John Paul II dedicated the entire sixth chapter of his theology of the body (TOB) catechesis to reaffirming and deepening the Church’s teaching on responsible parenthood, providing his most direct and extensive application of TOB to the Church’s teachings on sexual morality. Drawing upon the teachings of Gaudium et Spes and Humanae Vitae , St END_OF_DOCUMENT_TOKEN_TO_BE_REPLACED
Children's Catechesis: Theology of the Body for the Very Young
By Katrina Zeno
In the book Speaking the Truth in Love , Dr. Petroc Willey offers a triadic framework for transmitting the faith: the heart, head, and hand, where hand is the process of “handing on” the Deposit of Faith. [1] I hope he won’t mind if I borrow this triadic framework and modify it slightly for teaching St. John Paul II’s theology of the body (TOB) to END_OF_DOCUMENT_TOKEN_TO_BE_REPLACED
Youth & Young Adult Ministry – The Miracles God Can Work in Just Forty Hours a Week: The Fruits of Boundaries in Ministry
By Andrew and Coreen Wagenbach
Who could survive a low-paying, time-consuming, unpredictable, and exhausting job for more than a few years? And if they do survive, who could possibly thrive, especially as a family? We are living proof that it is possible, but it takes an important skill that many of us were not taught: building and protecting boundaries . The first requirement END_OF_DOCUMENT_TOKEN_TO_BE_REPLACED