Authored by Jennifer Healy in Issue #6.2 of Catechetical Review 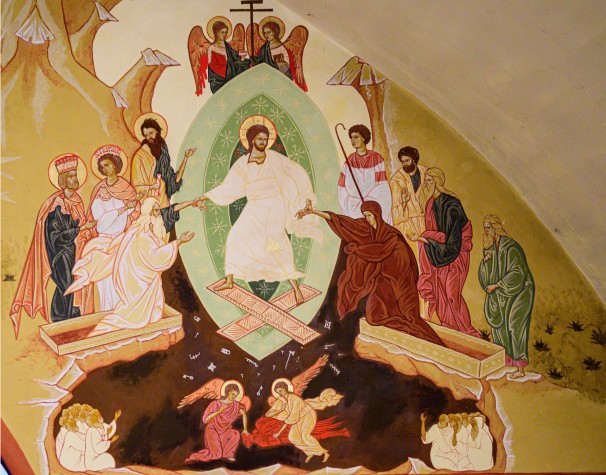 “We are a people of the Resurrection.”

These words of St. Augustine, echoed in more recent times by St. John Paul II, call us to live in the hope and joy of Christ’s victory over death. Even in times of suffering, spiritual aridity, or simply the humdrum of everyday life, we have the glorious light of truth to live by: Jesus has redeemed us through his Passion, and we will live forever.

Certainly, in the Western tradition we are accustomed to images of Christ triumphantly stepping up out of the tomb, or rising above the astonished guards in a burst of light. These images fit in well with our understanding of the narrative. So then why the Descent?

One simple explanation is this: the exact moment of Christ’s Resurrection is not recorded in Scripture. There were in fact no eyewitnesses; it was an event hidden from human senses. Whereas, precise and numerous details of Jesus’ crucifixion are recorded by the Gospel writers, the details of his Resurrection are not.

Instead, what is recorded in Scripture are the reactions of Jesus’ followers, such as the women who came early to the tomb with myrrh and the apostles who found the empty tomb. Also recorded in Scripture are references to what happened between the Crucifixion and the early morning of his Resurrection[1]: namely, the descent to the dead, called Hades in Greek, where the righteous who died before the coming of Christ awaited redemption. As the Catechism states: “The frequent New Testament affirmations that Jesus was ‘raised from the dead’ presuppose that the crucified one sojourned in the realm of the dead prior to his resurrection…Jesus, like all men, experienced death and in his soul joined the others in the realm of the dead. But he descended there as Savior, proclaiming the Good News to the spirits imprisoned there” (CCC 632).

The tradition arose in the early centuries of the Church, then, to depict Christ’s descent to Hades, or the land of the dead, or hell, as we say in the Apostles Creed. This is the event which has inspired iconographers to give visible form to the central event of our faith and of all of history, placing before our eyes the power of the Resurrection.

The Art of the Icon

In Byzantine icons such as this one, every aspect of the work has meaning: the placement of the figures, the gestures, the colors, and every other detail. In this way, the icon can be read, or interpreted and understood theologically. That is why it is often said, and strictly said in the Orthodox Church, that icons are written. The iconographer follows the established canon, thus safeguarding the tradition and communicating the truths of the faith in a clear language.

Likewise, the artistic process of iconography adheres strictly to an established way of icon-writing and includes fasting and prayer. That means that an icon is not just a lovely picture, or a helpful illustration. Rather, it is a work which speaks of the Divine; it reveals spiritual truths.

When approaching an icon, it is important to remember that the aim of the image is not to paint a realistic scene in the sense of skillfully depicting in colors and lines something just like what the viewer might see in the everyday world. Instead, the aim is to be a window to the spiritual realm; to convey what is timeless and other-worldly.

Looking at this icon, we see the triumphant Jesus in the center, adorned in brilliant white garments. The white indicates the Light which has overcome the darkness of death. A mandorla, or almond-shaped aura of light radiates around his figure. The green color symbolizes Life and the power of the Holy Spirit. The arms of the cross appear in the golden halo surrounding his head, as well as the letters referencing Exodus 3:14, “I am who I am.” More letters appear in the green space above each shoulder: the first and last letters Jesus Christ in Greek, as is customarily written in icons. His bearded face bears an expression of power and mercy, with no trace of condemnation or wrath.

His spiritual power is expressed by his not being bound by the law of gravity: he stands above the dark abyss, as the Lord of the whole cosmos, and he is trampling on the broken gates of Hades. The bars of the gate form an “x,” roughly in the shape of a cross, the instrument through which Christ has won the victory.

Strewn about, falling into the depths, are the tools with which Satan attempted to secure the gates: nails, screws, bolts, locks, and keys—all the tricks and trappings of Satan are vanquished by Jesus’ victory. No tool of the Enemy can stop the Love of God in the sacrifice of Jesus from reaching all men.

As Jesus victoriously steps over the destroyed gate of hell, he pulls Adam and Eve from their tombs by the wrists; they were the first to sin and now are the first to be brought from the depths of the underworld. As the iconographer Fr. Tomas Labanic describes the two, “They are represented as old because the human race is old. They are clothed because they still represent their state of sin in paradise, in which they recognized they were naked after committing the sin, and went to cover themselves.”[2]

Below them, in the recesses of the cavern, are groups of the righteous ones who died before the coming of Christ. They are the faithful awaiting redemption, and Jesus is coming into the darkness—dispelling the darkness—to save them. With his power and light, he will bring them to himself.

The Catechism clarifies the distinction between the dead and the damned, or those who through their own free will have separated themselves from the love of God and salvation. “Jesus did not descend into hell to deliver the damned, nor to destroy the hell of damnation, but to free the just who had gone before him” (CCC 633).

Returning to the center of the image on each side of Jesus, we see Old Testament figures, who witness Christ’s redeeming action. On the left: King David, King Solomon, and John the Baptist each point to Christ. On the right: Abel (the first to die), Noah, Abraham, and Moses each prefigure Christ.

Above the whole scene, two angels reverently remind the viewer of Christ’s Passion: one holds the Cross and the other the chalice with the precious Blood of Jesus. The angels below serve and carry out the Lord’s work of vanquishing Death: they cast down into the abyss the Evil One, who is bound hand and foot and is utterly powerless.

Called to Live in Light of This Powerful Truth

This icon is  presented on a wall of a chapel which includes the cycle of Salvation History, beginning with the Creation of Adam and Eve and including the Fall and the Crucifixion. While not showing the moment-by-moment event of the Resurrection, it presents the awesome power of God and his redeeming action. It convinces the viewer of the reality of salvation, thus communicating deep joy and hope.

This view of the Resurrection can help us celebrate the holy liturgical feast of Easter, calling our attention to the Risen Lord and how much he desires us to draw us to himself. And throughout the year, especially on Sundays every week, we can and ought to remember the life we are called to live as redeemed children of God, as people of the Resurrection.

Jennifer Healy lives in Gaming, Austria. She teaches visual arts for the Austria Program of Franciscan University and is Co-director of the Language and Catechetical Institute.

Rev. Tomas Labanic is a Greek Catholic priest of the Eparchy of Kosice, Slovakia. In addition to fulfilling his usual pastoral duties, he regularly completes sacred art commissions and leads iconography courses in Austria, Slovakia, and the USA.

This article originally appeared on pages 21-24 of the printed edition.

Editor's Reflections: “Freedom For” and “Freedom From”
By Dr. James Pauley
Free What is freedom? Here in America, we sing that ours is “the land of the free.” But, of course, building a free society requires that we put laws in place that actually limit some freedoms. We recognize that these limitations are for the good of our common community. It’s clear in our day-to-day living that human freedom, the ideal for which we END_OF_DOCUMENT_TOKEN_TO_BE_REPLACED
Evangelization and Personal Freedom
By James Franke
If someone is married, in love, or has ever been in love, they can likely tell you when they knew they were in love and, more importantly, when they knew their significant other was in love with them. It’s also likely that one of the individuals fell in love first. Their heart had been moved and they had “arrived” to love. After having arrived, END_OF_DOCUMENT_TOKEN_TO_BE_REPLACED
Freedom and Conscience
By Fr. Jay Mello
Free Jiminy Cricket was no theologian or philosopher, but in the Disney Classic Pinocchio, the talking cricket was assigned to serve as the “conscience” for the puppet who was made a “real boy.” The innocent puppet that is familiar to all of us was instructed to follow his conscience in the pursuit of being a good boy. Unaware of what a conscience is END_OF_DOCUMENT_TOKEN_TO_BE_REPLACED