Leisure: The Basis of Renewal

Authored by Brad Bursa in Issue #6.2 of The Catechetical Review

Evangelizing structures change. They must and they do. The Second Vatican Council emphasizes that the Church’s very nature is missionary and that she exists to reveal the mystery of Jesus Christ in every generation.[1] In order for evangelization to be fruitfully carried out in any age, the Church must employ human strategies, or “manmade” evangelizing structures suited to the communication of the Gospel within the present circumstances. A cursory glance at the Church’s history reveals a variety of such structures: the preaching of the Fathers and the sacrifice of the martyrs in the early Church, the emergence of monastic and mendicant movements during the Middle Ages, the explosion of religious congregations following the Reformation, the growth of Catholic schools, and so forth. Many of these elements are still in place, though their prominence in the Church’s overall evangelizing movement shifts based upon the needs of the time.

Given culture’s constant flux, the Church’s evangelizing mechanisms can become ineffective or obsolete and, therefore, in need of updating. If these structures are not renewed, they risk obscuring the Church’s ability to communicate Christ clearly. Moreover, without renewal, the Church can tend to devolve into an entity concerned more with self-reference, self-preservation, and maintenance than with actualizing her missional nature as the sacrament of salvation pointing to Another—the one who spends herself with Christ for the salvation of souls. Therefore, the effectiveness of the Church’s mission in every age is, in some sense, contingent upon constant ecclesial renewal, the constant renewal of her evangelizing structures.

Vatican II’s call for aggiornamento is essential for a New Evangelization that is “new in its ardor, methods and expression.”[2] That renewal is necessary is not the question following the Council, the real debate has to do with precisely how one ought to go about renewing methods and structures. This little article is not the space for a complete treatment of the various approaches to renewal that spun out of the Council and into the decades that immediately followed it. Instead, I will attempt to offer a few insights regarding an approach to renewal that appears in the thought of Joseph Ratzinger, and make a few connections to the teaching of Joseph Pieper, a 20th century German philosopher, and his treatment of the concept of leisure. Ultimately, something quite surprising emerges in the thought of these men, namely, that the source of renewal does not lie in activity or work but—perhaps counterintuitively—in the effortlessness of leisure and the surprise of faith.

On Making and Working 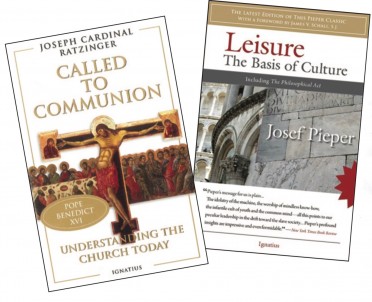 In a 1990 address, Ratzinger identifies two approaches toward renewal, which he personifies in the images of “the maker” and “the wonderer.” The maker takes the problem of ecclesial renewal into his own hands, makes decisions based upon his own ideals, and carries them out according to his own devices. He describes the maker as holding to the attitude that “The Church must no longer be fitted over us from above like a ready-made garment; no, we ‘make’ the Church ourselves, and do so in constantly new ways.”[3] Ratzinger goes on to say:

The maker values his own activity above all. He thereby restricts his horizon to the realm of things that he can grasp and that can become the object of his making….He has absolutely no capacity to perceive what is greater than he is, since such a reality would set a limit to his activity. He squeezes the world into the empirical realm.[4]

The maker is one who crafts, constructs, and shapes the Church according to “every whim.” Reform carried out by the maker might take place according to a democratic construal of the Church with decision-making through majority vote, by reducing faith to opinion, and by determining the success of initiatives via statistical measurements.

Ratzinger’s image of the maker coincides with Pieper’s “the worker,” as described in Leisure: The Basis of Culture. The worker embodies Max Weber’s observation that the guiding maxim today says, “one does not work to live; one lives to work.”[5] Pieper sees the shift of modernity as radically altering the conception of “man” as the “worker,” the “imperial figure” who seizes power.[6] Pieper identifies three principal traits in the image of the worker: (1) the reduction of work to activity, to making; (2) the idea that attaining the greatest goods should be difficult; and (3) that work is a social service—one’s contribution to the “common need.”[7] Today’s worker works in a utilitarian world, one that is enamored with functionalism and pragmatism. In the world of total work, there is no room for what appears to be impractical or unproductive. Instead, that which is useful is that which has value. This attitude is easily adopted by those who minister in the Church and who want to “get to work” on renewal efforts. Indeed, when the word “renewal” is used in the Church, it is quite often employed as an adjective describing the noun: “effort” or “efforts.” Renewal implies some sort of vigorous work for the sake of significant change.

On Wonder and Leisure

“The wonderer” is the antithesis of the maker or the worker. Ratzinger notes that an approach toward ecclesial renewal marked by wonder is grounded in an understanding that the Church is not something made by men, but is “given to us all.”[8] The wonderer is not pre-occupied with an overemphasis on the Church or idealistic visions of what the Church could be; rather, he is one who consistently looks to God, unites himself to God, and desires that God be known today. Wonder rejects empirical confinement, and “prepares man for the act of faith, which opens him to the horizon of the eternal and infinite. And only the unlimited is large enough for our nature and in accord with the call of our essential being.”[9]

Wonder is that experience of breaking through the narrow confines of the workaday world, and leisure makes this possible. Pieper defines leisure as man’s being “at one with himself, when he acquiesces in his own being….[it] is a mental and spiritual attitude…not simply the result of external factors.”[10] The wonderer is the one who has leisure, who is capable of leisure. The attitude proper to leisure contains three aspects which are precisely the opposite of those traits which characterize the worker. First, leisure implies an attitude of inward calm and silence. Leisure is not concerned with “being busy,” but with “letting things happen.”[11] This is the opposite of the image of the worker or the maker who busily reaches out, grasps, takes hold of, and fashions according to his own liking. Second, leisure is an attitude of contemplative “celebration” or “affirmation.” Leisure is less concerned with activity for activity’s sake, though it is not non-activity. Instead, leisure affirms the meaningfulness of life and this affirmation manifests itself in the festival, in celebration, in worship. Finally, leisure does not serve a utilitarian end—“leisure does not exist for the sake of work.”[12] Leisure is not some sort of restorative act in order that one would have the strength to work again, but that the human person could continue to be person and not “wholly absorbed in…his strictly limited function.”[13]

These insights from Ratzinger and Pieper present a vision for ecclesial renewal that grounds the whole effort in a certain effortlessness or an initial and perennial posture of receptivity. The act of leisure and the act of faith form something of two sides of the same coin. Both support renewal, both support that rediscovery of oneself, of what was originally and perpetually there though it had been crusted over in time. This kind of re-grounding or rediscovering Christ, and the resulting rediscovery of herself, makes clear which of the Church’s evangelizing structures need to be reformed. Ratzinger describes this movement by borrowing an image from Michelangelo. Michelangelo describes the sculptor as one who sees within the stone an image lying in wait, a pure image to be uncovered.[14] The sculptor’s task is simply ablatio (removal). Applying ablatio to ecclesial renewal, Ratzinger says:

This image [ablatio] contains the prototypical model of Church reform. The Church will constantly have need of human constructions to help her speak and act in the era in which she finds herself…But they become obsolete….Reform is ever-renewed ablatio…allowing the…countenance of the bride, and with it the Bridegroom himself, the living Lord, to appear.[15]

In a similar vein, Han Urs von Balthasar issues a warning that every planned attempt to share the Gospel will only remain Christian if it is oriented to Christ. He is wary of any program that develops from “catchwords” or which exists as a “canned” program, ready to be replicated elsewhere. Balthasar does not believe these will renew the Church and her evangelizing structures, but will ultimately have the opposite effect and further convolute things. Conversely, Balthasar claims, “Only in the openness of contemplation and listening prayer is there revealed to us ever anew what Christ, in whom we have our origin, means and wants. Every action that is not rooted in contemplation is doomed to sterility from the start.”[16]

Though ultimately writing about two separate realities (ecclesial structures and the nature of leisure), Ratzinger and Pieper’s lines of thought coincide in the effortlessness of wonder, which is the expression of the one who has or who experiences leisure. Ratzinger sees this experience of leisure as the posture that prepares one for the act of faith. In this way, they cohere with Balthasar’s call to root renewal in contemplation wherein one ultimately encounters Christ anew. Doing this, they avoid the pitfall of reducing renewal to purely human “efforts” marked by vigorous work and finite ideals. Such efforts inevitably burn out.

Brad Bursa, PhD, is the Director of the Archdiocese of Cincinnati's Office for Youth Evangelization and Discipleship and an Adjunct Assistant Professor of Theology at Thomas More University. He received his doctorate in Theology from the University of Notre Dame Australia and lives in Cincinnati with his wife and five children.

This article originally appeared on pages 14-16  of the printed edition.

Editor's Reflections: Leisure – God's Plan for Us
By Colleen Rainone
Free “ Life is what happens when you are making other plans.” How often people have said this with a wry smile as they cope with an untimely interruption to their well-ordered (or not-so-ordered), scheduled events. This phrase came to mind again, when Editor James Pauley informed me that he was losing his battle with a persistent cold, which developed END_OF_DOCUMENT_TOKEN_TO_BE_REPLACED
The Spirit of Leisurely Catholicism
By James Gaston
Free When I happened to mention to my wife that I was writing an essay about leisure, the following dialogue took place: Wife: “You can’t do that.” Me: “Why not?” Wife: “You don’t know anything about it. You’re working at something all the time.” Me: “That is somewhat true, but leisure isn’t really about what one does when one is not working. It’s END_OF_DOCUMENT_TOKEN_TO_BE_REPLACED
Leisure in the Life of the Christian
By Simone Rizkallah
Free The first time I read Josef Pieper’s book Leisure: The Basis of Culture, I felt I had finally encountered the philosophical and theological categories to explain the discomfort I felt in a culture obsessed with nonstop activity, imagery, and noise. Perhaps also being a first-generation American, with a Middle Eastern sensibility of leisure, I felt END_OF_DOCUMENT_TOKEN_TO_BE_REPLACED