Perspectives on the New Directory for Catechesis – Encouragement for Content: Openness to the Signs of the Times

Authored by Bishop Franz-Peter Tebartz-van Elst in Issue #6.4 of The Catechetical Review 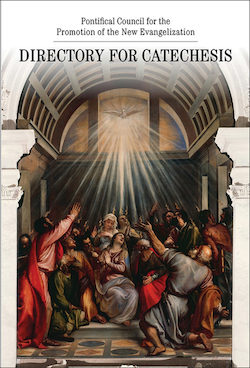 On June 25th of the current year, the Vatican’s Pontifical Council for the Promotion of the New Evangelization released the new Directory for Catechesis. This is the third explicit apos- tolic and official document on catechesis in recent times. The first one, the General Catechetical Directory of 1971, emphasized the results of the Second Vatican Council, while the second one, the General Directory for Catechesis of 1997, referred extensively to the Catechism of the Catholic Church that had appeared some years before in 1992. In this new edition, catechesis as a process has been underlined even more than in previous editions. The “catechumenal model” of the 1997 directory has been a significant influence on our catechetical reflections during the past years. The new Directory espouses it from its beginning[1] and proposes the catechumenate as the natural shape and identity of all catechesis.

Following this outline, the new Directory is sensitive and attentive to the cultural changes and challenges that have occurred during the past twenty years. It focuses on the ever-growing influence of the digital culture and on the question of how to transmit the faith under such circumstances. The Directory is aware of the opportunities and the limits that these new forms of communication present since these forms lead to new ways of thinking. While it responds to these cultural changes throughout all its parts, chapter ten focuses on special topics and areas that demand a fresh style of proposing the faith and of engaging in dialogue.

The structure of dialogue is understood not only as a method but also as the essence of the Christian faith. Pope Francis’ Apostolic Exhortation Evangelii Gaudium, with its emphasis on dialogue, is referenced extensively in the first chapter of the Directory and indeed throughout. God addresses and engages humankind in a dialogue of love, and we are called to respond to a God who has taken the first initiative. This calling takes place in all daily deeds of love and in the liturgy. Not as a form of activism but as a mystagogy according to an understanding of dialogue where God exists in every person and is calling them to faith and love. God is already in our hearts and minds before we start to act. In this sense, a liturgy that gives

space to this mystery is a kind of mystagogy—or, we can also say, a kind of mystagogical catechesis. In tandem with this understanding of catechesis, the new Directory also stresses the kerygma as a fundamental element of catechesis. This is taken from Evangelii Gaudium, where it states that any act of evangelization has to transmit the kerygma as a witness of love. Announcing Christ and his love for us is always a first and a continuous message to be included in any act of love. The Trinitarian structure of Christian faith is always evoked where compassion is lived and demonstrated. Finally, one notes that the new Directory incorporates extensively Pope Francis’ theological reflections, preaching, and pastoral care.

We can summarize the progress and content of the new Directory in six points that can be a source of reflection for the future as we read and examine it.

1.The new Directory is attentive to the signs of the times and tries to interpret them in the light of the Gospel— as the Pastoral Constitution of the Second Vatican Council, Gaudium et Spes, says. For instance, one of the great challenges of a digital culture is how the faith is to be passed on, particularly when for previous generations the context of the family in its intergenerational composition has been so important. In addition, the new Directory pays great attention to all issues related to the ecological crisis and, as far as catechesis is concerned, refers to the Papal Encyclical Laudato Si. In this consideration of the signs of the times, the Directory does not take a unilateral and undifferentiated position but rather helps to consider opportunities and limits in an appropriate way.

2. In this context, the new Directory for Catechesis emboldens catechists to be more courageous in the proclamation of the content of faith. Based on the Apostolic Letter of Pope Francis Evangelii Gaudium, the kerygma is not understood in the strict sense of the word as a faith summarized in certain sentences, but as a witness that gives rise to new witnesses.

3. With reference to the Apostolic Exhortation Evangelii Nuntiandi (1975), and largely inspired by the document Evangelii Gaudium, the new Directory underlines the importance of catechesis as an indispensable part of a wider process of evangelization. Also, in this sense the current Directory represents continuity and innovation at the same time. Emphasizing the specific teaching responsibilities—from the bishop as first catechist of his diocese to the frequently very important role of the catechesis offered by grandparents—catechesis cannot be delegated but is the most intimate essence of all forms and ways of preaching the faith.

4. Like the previous directory of 1997, the present document bases the process of any catechesis on the catechumenate as an original way of Christian initiation. Especially under the current challenges of a missionary pastoral ministry, the catechumenate is becoming a helpful paradigm in content and structure for teaching and personally internalizing the faith. This is how a Christian and ecclesial identity grows.

5. Beginning with the Apostolic Letter Amoris Laetitia, the new Directory also promotes the development of a marriage-catechumenate, in this sense analogous to the process of initiation, to emphasize the preparatory phase of marriage in its catechetical meaning.

6. More than the previous directories of 1971 and 1997, the current document underlines a central idea of the Apostolic Letter Evangelii Gaudium. In the latter, Pope Francis expressly speaks of the importance of the via pulchritudinis as a central starting point for evangelization in the postmodern era. This outlines the understanding that beauty should not be misunderstood as aestheticism but rather—in accordance with the teachings of Pope Benedict XVI—that truth is beautiful and beauty is true.

The great expectancy of the new Directory for Catechesis—especially in the Anglo-Saxon countries and Southern and Eastern Europe, in the United States and North and South America, in Africa and Asia—shows that catechesis needs the exchange of churches in the world. The many local churches committed to the development of their diocesan directorates for catechesis will acquire new inspiration and motivation from the new document. This is my experience derived from the many conferences on catechesis that I have attended in recent years in the various local churches, and from the considerations that many people have expressed to me, together with their great expectation and joy for the new document.

Most Rev. Bishop Dr. Franz-Peter Tebartz-van Elst is the Delegate for Catechesis at the Pontifical Council for the Promotion of the New Evangelization in Vatican City.

Editor’s Note: The next issue of The Catechetical Review will be dedicated to the new Directory for Catechesis, with articles exploring each of its chapters.

This article originally appeared in the From the Shepherds department on pages 12-13 of the printed edition.