From the Shepherds: Charity in Truth—The Supreme Court Decision on Marriage

Authored by Archbishop William Lori in Issue #1.4 of Catechetical Review 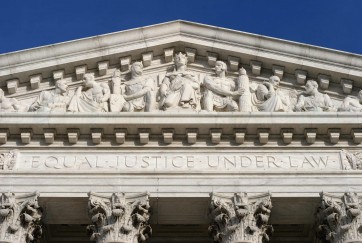 Let’s put things in perspective. For over 2000 years the Church has proclaimed the Gospel. Sometimes her teaching is welcomed with joy; sometimes with skepticism or indifference; and sometimes with outright rejection. Through it all the Church has gained much experience in living and ministering in lands where her teachings are deemed to be on the wrong side of the polls and even on the wrong side of the law. Not to put too fine a point on things, that experience is not always pleasant. Jesus told us there would be troubles along the way.

Where Do We Go from Here?

The first instinct might be to withdraw from the world, like the frightened disciples in the upper room just after Jesus rose from the dead. The better impulse is from the Holy Spirit, poured out upon the Church at Pentecost. St. Paul summed it up when he said, “Woe is me if I do not preach the Gospel” (1 Cor 9:16). In the same vein, Pope Francis has urged all of us to be missionary disciples, followers of Christ who bear witness by lives of love to the sound doctrine of the Gospel “in season and out of season” (2 Tim 4:2), whether welcome or unwelcome. The Church goes forth and proposes with joy and courage the words of spirit and life. And like a family it welcomes all those who are open to the Gospel and who, in spite of human weakness, strive to live it. If we are honest with ourselves, we all fall short of living the Gospel and are reliant on the mercy of God.

In a very short time, preaching and teaching about marriage as exclusively between one man and one woman has become culturally controversial. It is routinely compared to the bigotry of those who opposed interracial marriages or is thought to be based on hostility toward homosexual men and women. It is worth thinking about these claims; they are not self-evident. Those who opposed interracial marriages did not deny that such marriages could take place but rather, for reprehensible reasons, they argued that they should not. Indeed, the Church’s teaching rejects unjust discrimination against anyone and calls for the respect of every person’s human dignity.

Marriage also pertains to human dignity. In God’s plan it is linked to bringing children into the world. Even in our technological age, only a man and woman can beget a child; two people of the same sex cannot do so. This is not just a biological fact but part of what Pope Francis calls “human ecology.” Here he reflects what the Church’s teaching and vast human experience has demonstrated: every child ought to have a loving mother and a father and a stable home. This accumulated wisdom is not against anyone. It is for children. It is for the good of human society. Indeed, until recently, the government understood that its primary interest in marriage was the good of children, not adult friendships.

The Church is never completely at home anywhere in the world; but throughout the balance of its history, the United States has been hospitable, not only to the Catholic Church but also to religion in general, thanks to its constitutional guarantees of free speech and freedom of religion. And for much of its history the United States has agreed with George Washington who said that, “of all the dispositions and habits that lead to political prosperity, religion and morality are indispensable supports” (Farewell Address). Of late that has begun to change. Today freedom of religion, the first of our freedoms, is taking a back seat to a newly discovered (but textually absent) freedom in the Constitution: the nearly unbridled freedom of sexual expression. Preaching the Gospel or seeking to live by countercultural convictions is becoming problematic, potentially punishable by law.

Justice Kennedy’s majority opinion legalizing same-sex marriage recognizes the right of churches and conscientious individuals to teach and advocate otherwise, that is, their right of free speech, a right which his own opinion burdens. What is more troubling is that his opinion does not recognize the right of churches and conscientious individuals to act on what they believe, that is to say, the free exercise of religion: to be able to hire those who are in accord with the Church’s mission; to grant employee benefits according to the Church’s deeply held beliefs; to enter into contracts with the government for social services without having to change its teachings on marriage and sexuality. Already in many places the Church has been forced out of providing adoption and foster care services because of its refusal to place children with same-sex couples or unmarried opposite-sex couples who co-habit. After years of excellent performance by the U.S. Conference of Catholic Bishops’ Migration and Refugee Services (MRS) in administering contract services for victims of human trafficking, the federal government changed its contract specifications to require MRS to provide or refer for contraceptive and abortion services in violation of Church teaching. Nor does the Supreme Court ruling remove from churches the possibility of losing their tax exemption for teaching that marriage is between a man and a woman and organizing their ministries accordingly.

It will be some time before the full impact of the Court’s decision is known. What we do know is this: the four dissenting opinions of the High Court were exceptionally strong and call into question the long-term sustainability of Obergefell. With the passage of time, its flawed argumentation will be more apparent. So too it will become ever clearer that Obergefell is profoundly contrary to our “human ecology.” In the meantime, it is important to oppose the reasoning of this decision but in a way that is respectful. We also need to remain vigilant against unfair charges of unjust discrimination coupled with further incursions against our religious liberty rights. Most of all, it is by living the Church’s teaching on the vocation of marriage and family, by setting a good example of joy and virtue, that Catholic couples can be a fruitful and life-giving “sign of contradiction.”

Most Reverend William E. Lori has served as the archbishop of the Archdiocese of Baltimore, Maryland since 2012. Archbishop Lori had previously served as the fourth Bishop of Bridgeport, Connecticut. In 2011, he was appointed to be the Chair of the Ad Hoc Committee for Religious Liberty of the United States Conference of Catholic Bishops (USCCB). Another version of this article is also published in Catholic Review (3 July 2015) under the title “Charity in Truth: Supreme Court Decision on Marriage—Where do we go from here?”

This article was originally on pages 14-15 of the printed edition.

Editor's Reflections: “Freedom For” and “Freedom From”
By Dr. James Pauley
Free What is freedom? Here in America, we sing that ours is “the land of the free.” But, of course, building a free society requires that we put laws in place that actually limit some freedoms. We recognize that these limitations are for the good of our common community. It’s clear in our day-to-day living that human freedom, the ideal for which we END_OF_DOCUMENT_TOKEN_TO_BE_REPLACED
Evangelization and Personal Freedom
By James Franke
If someone is married, in love, or has ever been in love, they can likely tell you when they knew they were in love and, more importantly, when they knew their significant other was in love with them. It’s also likely that one of the individuals fell in love first. Their heart had been moved and they had “arrived” to love. After having arrived, END_OF_DOCUMENT_TOKEN_TO_BE_REPLACED
Freedom and Conscience
By Fr. Jay Mello
Free Jiminy Cricket was no theologian or philosopher, but in the Disney Classic Pinocchio, the talking cricket was assigned to serve as the “conscience” for the puppet who was made a “real boy.” The innocent puppet that is familiar to all of us was instructed to follow his conscience in the pursuit of being a good boy. Unaware of what a conscience is END_OF_DOCUMENT_TOKEN_TO_BE_REPLACED