From the Shepherds: Missionaries of Hope Today

Authored by Pope Francis in Issue #4.2 of The Catechetical Review 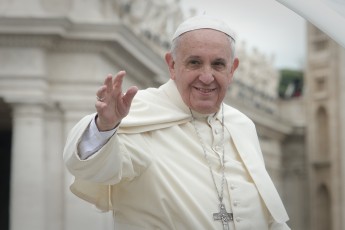 The Christian is not a prophet of misfortune. …The essence of the Christian proclamation is the opposite, the opposite of misfortune: it is Jesus who died for love and whom God raised on Easter morning. And this is the nucleus of Christian faith. If the Gospels had ended at Jesus’ burial, the story of this prophet would have been added to the many biographies of heroic figures who expended their lives for an ideal. The Gospel would then be an edifying book, and also a comforting one, but it would not be a proclamation of hope.

But the Gospels do not end on Good Friday. They go beyond it; and indeed, it is this additional fragment which transforms our lives. Jesus’ disciples felt dejected on the Saturday after the Crucifixion. The stone that was rolled against the door to the sepulchre had also sealed the three thrilling years they had lived with the Teacher of Nazareth. It seemed that everything was over, and some of them, disappointed and afraid, were already leaving Jerusalem.

But Jesus is Risen! This unexpected fact overturned and amazed the minds and hearts of the disciples because Jesus was not raised for his own sake, as if his rebirth were a prerogative to envy: if he ascended to the Father, it was because he wanted his Resurrection to be shared with every human being and to take each creature Above. And on the day of Pentecost, the disciples were transformed by the breath of the Holy Spirit. Not only would they have good news to share with everyone, but they themselves would become different from before, as reborn to new life. The Resurrection of Jesus transforms us through the power of the Holy Spirit. Jesus is alive. He is alive amongst us. He is living and has the power to transform.

How beautiful it is to think of ourselves as proclaimers of the Resurrection of Jesus, not only in words, but also in our conduct and testimony of life! Jesus does not want disciples who are merely able to repeat memorized formulas. He wants witnesses: people who spread hope, with their way of welcoming, smiling and loving; above all loving because the power of the Resurrection makes Christians capable of loving even when love seems to have lost its motivation. There is a “plus” which embodies Christian life and that cannot be easily explained by fortitude or greater optimism. Faith, our hope, is not just optimism; it is something else, more! It is as if believers have an additional “piece of heaven” over their heads. This is beautiful: we are people with an extra piece of heaven over our heads, accompanied by a presence which some are not even able to sense.

Thus, the task of Christians in this world is to open spaces for salvation, like regenerative cells, capable of infusing the blood of life to what seemed lost forever. When the sky is cloudy, it is a blessing for someone who knows how to talk about the sun. Here then, the true Christian is like this: not whiny and angry, but convinced through the power of the Resurrection that no evil is infinite, no night is without end, no man or woman is definitively wrong and no hatred is impervious to love.

Certainly, at times the disciples would pay a high price for this hope given to them by Jesus. Let us think about the many Christians who did not abandon their people when the time of persecution began. They stayed there, where even the morrow was uncertain, and where no plans of any kind could be made. They remained, hoping in God. And let us think about our brothers and sisters in the Middle East who bear witness to hope and offer their lives for this witness. They are true Christians! They bring heaven into hearts. They look beyond. They always look beyond. Whoever has had the grace of embracing the Resurrection of Jesus can still hope in the unhoped for. The martyrs of all times, with their fidelity to Christ say that injustice does not have the final word on life. In the Risen Christ we can continue to hope. The men and women who have a “reason” live, resist better than others in times of misfortune. But those who have Jesus at their side, do not fear anything. And this is why, Christians, true Christians, are never easy and accommodating people. Their meekness should not be confused with a sense of insecurity and submission. Saint Paul spurred Timothy to suffer for the Gospel, and he said the following: “God did not give us a spirit of timidity, but a spirit of power and love and self control” (2 Tm 1:7). When they fall, they always rise again.

This is why dear brothers and sisters, the Christian is a missionary of hope, not by his or her merits, but thanks to Jesus, the grain of wheat which fell to the earth, died and bore much fruit (cf. Jn 12:24).

Excerpt from Pope Francis’ General Audience, Oct. 4, 2017. The full text can be read here in English and here in Spanish.

This article originally appeared on page 9 of the printed edition.