The Spiritual Life: Encountering the Joy of the Holy Spirit

Authored by Benjamin Gessler in Issue #7.4 of The Catechetical Review 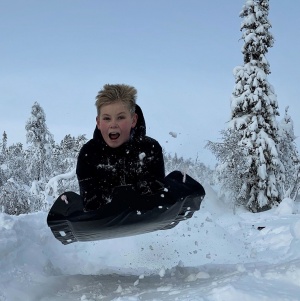 A cascade of trees flowed down the hillside towards the water, a body of water that was bigger than a pond but not quite a lake, on the lands belonging to the Holy Ghost Fathers in southern Connecticut. In England it might be called a mere, but in my childhood, we neither knew nor cared about things like that: for us it was simply boys’ paradise, especially in winter.

The Holy Ghost Fathers never bothered us, nor ran us off—in fact, I cannot recall ever seeing them. Perhaps the mere was too far from the main house, or perhaps they just wanted boys to be boys, turning a blind eye and letting us be. Today I am sure legal counsel would be all over them, requiring carefully crafted signs to ward off the remotest liability. But fifty years ago, they were less stuffy about things like that. Boys and water are natural magnets, and we were determined to make the best of it.

One summer, my younger brother worked weeks to craft a sled run through the trees for the winter. He was like that: A steady hand. A planner. Me, I was mercurial, rejoicing in the moment, running as the spirit would take me. But in the winter, we used his sled run to go flying down the hillside, full tilt, fantastically gliding around tree trunks, any one of which could have lobotomized us in an instant. But we didn’t mind—in fact, that was the dare of it. In an age when zoom was for speed, not meetings, we would careen down the hill, rocket over a wide path, and go flying off the bank onto the frozen pond for a spectacular airborne moment. Pure freedom. How far could we take flight? How hard could the landing be to make that perilous great echo upon the ice? In this unusual way, the Holy Ghost Fathers were my first introduction to anything related to the Holy Spirit.

My next introduction came some years later. I am not exactly sure of the order of things here—it was thirty-six years ago, after all—but close together I made my confirmation and attended a Life in the Spirit Seminar.

I was a late confirmand at age twenty-four. Growing up in a house with a Jewish father and Catholic mother, religion was a careful affair, even an art form. My father rejected religion; my mother was devoutly Catholic, and threading the needle of faith required the skills of a Belgian lacemaker. Despite my father’s disdain for religion, my mother made sure we had candles and plaited challah bread and decorated head coverings called yarmulkes for shabbat on Friday evenings, while cheerfully taking us kids to Mass on Sunday mornings. So skilled was she at navigating the shoals that I do not recall a single public outburst over religion between them, even though their differences were profound.

I drifted away from the faith in college but came back through a trial-by-fire reversion and requested confirmation. I was confirmed with the eighth-grade class of St. Charles Borromeo School in Kettering, Ohio, on March 24, 1985, standing at the back of the line, too tall by a head and quite out of place. But I didn’t mind. I was so happy to be back. After fruitless years of college philosophizing, I took Mark as my confirmation name because Mark’s Gospel was less about what Jesus said and more about what he did. It was the “doing” Gospel, actions not words. That’s want I wanted in my own life—less words, more actions. So Mark it was. (St. Mark and the Holy Spirit responded by getting me a position running the computer network for Ohio Right to Life for eighteen years, a job of definitive practicality and front-line action.)

But before all that, somewhere in this time period, my mother invited me to a Life in the Spirit Seminar. It had been a difficult few years, and I was full of the seriousness of a young man overintellectualizing life and having entirely too little fun. Caught up in the mazes of the mind, having barely survived an existential crisis twinned with torrents of anxiety, I was uncertain and unhappy.

The Life in the Spirit Seminar was run over three days, beginning on a Friday night. I attended with trepidation, a feeling that was promptly confirmed when I saw people toppling over after others prayed with them. I remember the hairs on the back of my neck jumping up and shouting: don’t walk—run! What kind of cult was this? Only trust in my mother kept me from bolting.

It was not long, however, before the prayer team singled me out. Maybe bolting was a good idea after all. But now they were upon me and, as they prayed, my mother asked for a particular gift for me: the gift of joy. It was such an unusual request, so unexpected for me. Joy? But that is what she prayed for with the team, and I know there came upon me a true outpouring of the Holy Spirit. Suddenly I, too, was warming the floor.

The next day, I was enthralled by the conference, making friends and feeling, well, happy. At peace. Like I had not felt in a very long time. On Sunday, we were invited to give testimonies. There was a raised stage with a podium and, one by one, participants went up to the mic to praise the Holy Spirit and testify what he had done in their lives.

Having passed through the churning chasm of an anxiety illness, standing up in front of a crowd was the last thing I wanted. And yet, this was different. Or I was different. I knew I needed to testify. I got up, went to the podium, and looked out at a sea of faces. I paused and said simply, “I want to show you what the Holy Spirit has done for me.” I stepped down from the stage and did the only thing I could do to show the joy of the Holy Spirit: I sprinted forward and suddenly threw arms to the ground, turning three full handsprings across the front of the stage, to the startled amazement of three hundred people.

Ah, the gift of joy!

The perfect gift, and one that for all these years I have called upon again and again. Now scripturally, joy is a fruit of the Holy Spirit (Gal 5:22), not a gift, and certainly that is true. But for me, it began as a gift, a request for an outpouring of the joy of the Holy Spirit by a mother upon her suffering son.

The first fruits of eternal glory! Imagine that.

Like the faintest streaks of dawn over the eastern hills, these first fruits of eternal glory are brought forth in us by the Holy Spirit as he works in our hearts. Over the years, I have begun to understand this dawning of joy is, in fact, both a fruit and an unmistakable sign of the indwelling of the Holy Spirit. My confirmation and my experience of the Holy Spirit at the seminar have had a dramatic, life-altering effect, one that continues to this day. For the Lord does not take back his gifts nor does the Holy Spirit withhold his fruits; rather, they are to be called upon, used, and enjoyed for life—and for eternity. Such is the superabundant generosity of God, generosity for which I am beyond grateful.

Yet I hasten to add that this experience, this generosity is not unique to me. It is for you, for all of us. Do you, too, wish joy? Do you wish for that outpouring of the Holy Spirit upon you? It is so easy: just ask. Can it really be that easy? But of course! Jesus says, “Ask and it will be given to you . . . For everyone who asks, receives” (Mt 7:7a, 8). Seven times in the Gospel of John—a biblical seven—Jesus says that whatever we ask in his name will be given to us. So take courage and ask: “Dear Holy Spirit, in your holy name, please give me your joy. Amen.” So simple.

May we be filled with the joy of the Holy Spirit and may his holy name be revered and praised and glorified, now and forever.

Benjamin Gessler is Director for Annual Giving for Franciscan University. He and his wife Mariely, “The Rose of Mexico,” are proud parents of seven children, two of whom are now Franciscan graduates (five to go!). Ben is an acolyte and candidate for the diaconate for the Diocese of Steubenville.

This article originally appeared on pages 30-31 in the print edition.

From the Shepherds: Community Life - in the Directory for Catechesis
By Dr. Caroline Farey
Free END_OF_DOCUMENT_TOKEN_TO_BE_REPLACED
RCIA & Adult Faith Formation: How Early May a Baptized Candidate Go to Confession?
By Fr. Drake McCalister
One of the most stressful moments for baptized Protestants entering into full communion with the Catholic Church is making their first Confession. Unlike Catholics who typically need only to recall sins from a month or so, these baptized adults in RCIA must make a first Confession covering their entire lives—many decades for most. Occasionally, a END_OF_DOCUMENT_TOKEN_TO_BE_REPLACED
Children’s Catechesis: Educating in Christ – A Classroom Adaptation of the Work of Sofia Cavalletti
By Dr. Gerard O'Shea
In September, 2018, I received a bemusing phone call from Anthony Gordon, the director of Catholic schools in a rural Australian Diocese. He asked me whether I would consider applying for the position of Diocesan Director of Religious Education and Mission. At the time, I was working in my “dream job” as a professor of religious education at the END_OF_DOCUMENT_TOKEN_TO_BE_REPLACED