Authored by Bob Rice in Issue #29.2 of The Sower 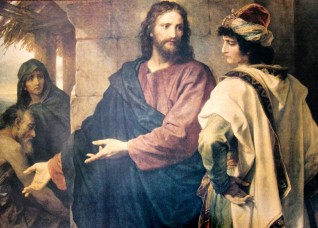 "Good teacher, what must I do to inherit eternal life?"

He must have been a sight to behold: a young man born of wealthy parents and clothed in a way that made him stand out from the normal ‘riff-raff’ that followed Jesus along the road.  The people instinctively cleared the way for a person of such standing, even though he was younger than most of them.  He boldly came forward and knelt before the carpenter’s Son, asking the question that still echoes in the heart of all humanity.

Jesus’ response was very educational: ‘You know the commandments:  You shall not kill; You shall not commit adultery…’ and so forth.  It was a basic catechesis, echoed down for generations since the time of Moses.  But the young man wasn’t satisfied.

‘Master,’ he explained, ‘I have kept all these since my earliest days.’

And Scripture tells us that Jesus looked steadily at him, and he was filled with love for him.  ‘You need to do one thing more,’ Jesus said.  ‘Go and sell what you own, and give money to the poor… then come, follow me.’  But the young man’s face fell at these words and went away sad, for he was a man of great wealth.  (Mark 10:17-22)

The General Directory for Catechesis tells us that this story is central in understanding how to pass on the faith to young people.  ‘The heart of catechesis is the explicit proposal of Christ to the young man in the Gospel; it is a direct proposal to all young people in terms appropriate to young people, and with considered understanding of their problems.’ (GDC 183)

The rich young man was given an opportunity that the rest of humanity could only dream about: to be a disciple in the time of Christ!  He had an opportunity to become one of the Church’s first saints, but his riches held him back.  And though we know the story, we do not know his name.

The youth of today are offered the same challenge.  Will they be nameless consumers driven by an economically driven society, or will they change the world through the power of the Holy Spirit?  ‘Therefore, young people cannot be considered only objects of catechesis, but also active subjects and protagonists of evangelization and artisans of social renewal.’  (GDC 183)

It is an important reminder to us that we need to offer our youth not just information about the faith, but involvement in the life of Christ.  One of the most inspiring aspects of young people is their ability to dream big.  The post-modern culture can displace this hope with despair, but in Christ teenagers can find their true calling.  We must train them for evangelization, and give them opportunities for meaningful service (acts that make them realize that they can make a difference, not just busy work to keep them occupied).

To know about Christ is vital, but is not enough.  ‘You believe in one God- that is credible enough, but even demons have the same belief, and they tremble with fear.’  (James 2:19)  Knowledge must be followed by a call to discipleship.  Many see the story of the rich young man as a difficult call to poverty, focusing on what the young man was asked to give up.  But we must focus on the opportunity he had.  And that same invitation is being offered to them right now!

The Gospel story reminds me of the football team, the New England Patriots.  Last year, they were undefeated heading into the Super Bowl—a feat only accomplished by one other team more than 30 years ago.  The game was the second most watched show in the history of television, and it was an opportunity for the Patriots to make history.  And they did.

They became the first team in the history of the National Football League to win every game in the season, but lose in the Super Bowl.

Like the rich young man, they did everything right… except for the final and most important thing.  And history will remember them, not for the 18 games they won, but for the one they lost.  Let us not let this happen to our youth.

And let it not happen to us!  As a catechist, I find the challenge in the story is not just about who hears the message, but how we proclaim it.  I have found myself tempted to water down the dramatic invitation that Christ gives to something more ‘reasonable’ and easier to follow: an invitation to be ‘good’, not ‘great’.

But Jesus is looking at them (and us) with love, and inviting them to be protagonists and artisans in their culture.  ‘Any commitment to the betterment of society finds its hopes in them.’  (GDC 181)  Let us not be afraid to call these young people, these ‘morning watchmen of the new millennium’ as John Paul II fondly called them, into bold action – and intimacy - with Jesus Christ.

This article is originally found on page 38 of the printed edition. Public domain image.

Editor's Reflections: Toward a Eucharistic Revival
By Dr. James Pauley
Free The Feast of Corpus Christi last month was a momentous event in the life of the Church in the United States. The celebration of this liturgy begins a Eucharistic revival, a period of historic importance that will culminate in a National Eucharistic Congress in Indianapolis in the summer of 2024. The need for “revival” in relation to the Eucharist END_OF_DOCUMENT_TOKEN_TO_BE_REPLACED
The Spiritual Life: How the Eucharist Catechizes about the Meaning of Life
By Bishop Andrew Cozzens
Free The United States Conference of Catholic Bishops is currently undertaking a Eucharistic revival. The idea for it began in 2019 when the bishops decided that we needed to respond to the moment of crisis in belief in the Eucharist in which we find ourselves—not only the discouraging results of the 2019 Pew study that reported that less than 30 END_OF_DOCUMENT_TOKEN_TO_BE_REPLACED
The Real Presence of Jesus Christ in the Eucharist
By Brian Pedraza
Free The Real Presence of Christ in the Eucharist should be numbered among the most kerygmatic of the Church’s doctrines. Here is where the Son of God, who out of the immensity of his divine love became incarnate, has chosen to dwell amongst his people until the end of time. Here is where divine charity makes itself available to the human heart. Here END_OF_DOCUMENT_TOKEN_TO_BE_REPLACED