Authored by Sr. Hyacinthe DeFos Du Rau in Issue #34.1 of The Sower

“After doing session 2 of Anchor on sin and forgiveness, a participant has decided to go to Confession. She hasn’t been for 20 years.” This was reported last month by a catechist who, together with a group of parishioners, leads the Anchor course in her parish as a formation for parents of children preparing for their first Holy Communion. The parents are prepared alongside the children, equipped to provide answers and a Faith environment at home that will allow the gift of God to take root and flourish in the children’s lives, by first taking root in their own lives. Preparation for the sacraments is a unique moment for evangelisation and catechesis, for children and parents alike. 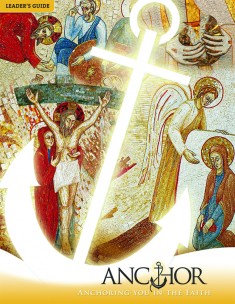 The Anchor resource, designed for adults, young people and specifically for parents, is at the junction between first proclamation and catechesis[1]. Its language is clear, simple, graceful and exact, presenting the truths of the Faith in a way which does not assume any previous knowledge or even a Christian culture. It has been successfully used with non-Catholics, some in RCIA and some who simply wished to gain a first understanding of the Catholic Faith and of the Sacraments without any explicit intention of becoming Catholics: “Anchor brings us insights into the Truth and fundamental meaning that Christ has for us all, and the importance of prayer.”[2] It is also used with mixed groups including Catholics and non-Catholics, such as prison chaplaincy groups and formation programmes for teachers working in Catholic schools.

The majority of the Anchor participants – parents, confirmation candidates, parishioners wishing to refresh and deepen their faith – are Catholics, in name only or in practice, be it intermittent. Anchor is designed to supply, through carefully crafted activities and texts, the catechetical foundations of an adult Faith, which may have been incomplete, misunderstood, forgotten, or altogether missing.  Thus, the Anchor course comes often as a revelation of something that always was there, but never quite appropriated: the Catholic Faith. This defines Anchor as a tool for adult catechesis, at the heart of the mission of the New Evangelisation: the evangelisation of peoples and cultures previously evangelised and who have forgotten their heritage of Faith. “One cannot speak of the New Evangelisation if the Catechesis of adults is non-existent, fragmented, weak or neglected.” [3] Here are a few comments given by some participants after completing the course: “A new beginning”; “it has made me more aware of the true meaning of the Mass”; “The course has anchored me”; “I have always treasured my faith, but I haven’t always appreciated how great a gift the Eucharist really is. This course has really helped me to look upon the gift of Christ Himself with new eyes and a fresh perspective.”

At the Heart of the New Evangelisation

The first Anchor volume, ‘Anchoring you in the Faith’, matches the foundational, Kerygmatic truths of the Faith with a step by step explanation of the Mass. This fosters a truly liturgical Catechesis, which indispensably places the Sacraments and particularly the Eucharist at the heart of the Catholic Faith and Life, thus avoiding a purely kerygmatic catechesis which risks presenting the Sacraments and so the Church as mere appendices to the content of the Faith. “The Eucharist must be the source and summit of the New Evangelisation.”[4]

A new Anchor volume, ‘Anchoring you in Happiness’ is now in preparation, to be published during the Year of Faith. Responding to the call for a return to Confession as a key to the New Evangelisation[5], ‘Anchoring you in Happiness’ will provide a thorough introduction to the Sacrament of Reconciliation and to the moral life, as an invitation to the fullness of life and love in Christ. Building on the first volume, but containing an inner coherence which allows it to be used separately, this new Anchor will now proclaim the foundational truths of the Faith from the perspective of the human person and her dignity as creature and adopted child of God, who falls through sin, is saved by Christ, called to conversion and invited to enter ever deeper into the Communion of the Blessed Trinity, now and forever. This six-session course will prepare adults to make an informed confession with a greater understanding of their dignity, freedom, conscience and vocation, but also of the absolute necessity of Christ and his Church as instruments of reconciliation with God, who is infinitely merciful.

Introducing the fullness of the Christian Life

Throughout six sessions (90 minutes long), Anchor’s objective is to offer a Trinitarian and Christocentric Catechesis providing an entry into the four dimensions of the Christian Faith and Life. An adult Catholic faith and life is not just a series of truths to be believed; not just a series of sacraments to be received, not just a series of moral precepts to be followed through grace. Nor is it just a personal relationship with God to be deepened through prayer. It is all of these together, inseparably, received and lived in the heart of the Church. Hence to catechise requires transmitting all these dimensions together and inseparably, with the unfailing help of the Holy Spirit, the first Catechist.  This is why every Anchor session contains four parts: professing the Faith; Celebrating the Sacraments; Living the Faith and Praying with the Church. The first three parts offer teaching and activities based on the sources of Faith: Scripture and Tradition (the sacramental rites). The last part – Praying with the Church – consists in 10 to 15 minutes of silent prayer under the breath of the Holy Spirit, interiorising the truths which have been discovered and spending time together to meet the living God.  Seeking to assess the impact of the Anchor resource on the development of the 4 dimensions of the Christian life, we recently conducted a survey after completion of the course.  42 participants out of 48 responded to the survey, coming out of a variety of backgrounds and practice of the Faith. Overall, the Anchor course helped them to pray more (93%), to live their faith better (88%), to grow in their understanding and love of the Mass (95%) and to grow in their understanding and love of the Faith (97%).

The truths of the Catholic Faith are first introduced in Anchor through Christian art, using the “Way of Beauty”[6], and through a “prayerful reading of Sacred Scripture”[7]. These are progressively understood and deepened, through led, shared activities, until is reached for the whole group a point of silent and prayerful contemplation for 10 to 15 minutes. This is perhaps the most crucial and fruitful element of Anchor, leading the participants to the Church for a time of prayer and leaving them to the gentle care of the Holy Spirit, the principal agent of evangelisation[8]. “Anchor addresses the crucial need which we have to understand our own lives, our many trials and life itself. In applying the lessons that Anchor provides there is great opportunity to deepen one’s understanding of...the Wisdom, Love, Truth and Goodness which will enable us to be true and willing servants of God the Father, God the Son, and God the Holy Spirit.”[9]

[1] Anchor proclaims the Kerygma: the foundational truths of the Faith, which the Synod on the New Evangelisation promotes as “an explicit announcement of salvation” taking place in the “first proclamation” necessary to the New Evangelization (proposition 9).

[2] Comment given by non-Catholic, who has been baptised as an infant in the Church of England, but does not belong to or attend any Christian denominations.

[3] Propositions 28 of the Synod on the New Evangelisation. The General Directory for Catechesis affirms that “Catechesis for adults, since it deals with persons who are capable of an adherence that is fully responsible, must be considered the chief form of catechesis.” (GDC 59)

[4] Proposition 34 of the Synod on the New Evangelisation. “The Synod Fathers urge all Christ’s faithful to renew their understanding and love for the Eucharistic celebration...”

[9] Comment of an Anchor participant on the way to becoming a Catholic.

This article is originally found on pages 40-41 of the printed edition.

Editor’s Reflections: The Liturgical Life – A Source of Healing
By Dr. James Pauley
Free “The kingdom of heaven may be likened to a man who sowed good seed in his field. While everyone was asleep his enemy came and sowed weeds all through the wheat, and then went off” (Mt 13:24–25). Our Lord’s imagery helps us make sense of difficult and painful situations existing within the Church. He is describing, afterall, the “kingdom of God.” END_OF_DOCUMENT_TOKEN_TO_BE_REPLACED
Advent at Home: Five Practices for Entering into the Season
By Brad Bursa
Free Most Catholic parents are so far removed from a rich Catholic culture that living a liturgical season—let alone the liturgical year—can seem impossible. Dr. Tracey Rowland, professor at the University of Notre Dame Australia, describes the scene by saying that young Catholics “find themselves in a situation where they have rarely experienced a END_OF_DOCUMENT_TOKEN_TO_BE_REPLACED
Principles for Celebrating the Liturgical Year
By Fr. Eusebius Martis, OSB
For Christians, the celebration of the mystery of Christ is, on the one hand, formative and, on the other, an opportunity to offer praise and thanksgiving. This is especially true for Catholics because the events of our salvation in Christ are recalled daily, weekly, seasonally, and annually. The awareness of the liturgical cycle may not be END_OF_DOCUMENT_TOKEN_TO_BE_REPLACED