The Church Is Holy: Perspective and Hope from St. Augustine 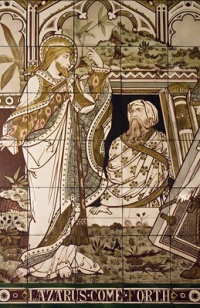 At a time when we know all too well the sins of our leaders, the “mark” of holiness raises questions. But insights from Saint Augustine can give perspective and hope—because even while the Church is “always in need of purification” (CCC 827), she is united with Christ and she is “sanctified by him; [and] through him and with him she becomes sanctifying” (CCC 824).[i]

When Christians were being persecuted in the third and fourth centuries, many clergy denied Christ in order to save their lives, which caused great scandal among the faithful. So, when peace returned among Christians, the Church struggled with how to reconcile these former betrayers, especially the clergy who had denied Christ.

The Donatists rejected a Church with betrayers among her clergy. The Church should be “pure,” they claimed, a spotless dove (Sg 6:9), an enclosed garden (Sg 4:12). They understood Paul’s exhortation to “clear out the old yeast” (1 Cor 5:7) ecclesiologically: cast out sinners from the Church, especially from among the clergy, since their sin utterly threatens the holiness of the Church.

But the bishop Saint Augustine was not so quick to cast away the sinners. Augustine knew his own experience of conversion through his mother’s affection and “tough love”—indeed, Augustine recalled how his mother’s tearful prayers for him wetted the ground everywhere she went and how she had “excommunicated” him from the dinner table until she saw the promise of his conversion.[ii] Augustine urged unity in the holy Church as a community of saints and sinners on a path of lifelong conversion.

Augustine began by noting the Church’s constant need for repentance. In his commentary on Psalm 100 (99), Augustine noted the necessity of repentance for eternal life. Christians “enter [God’s] gates with songs of praise” (in Latin: in confessione), but “once we are inside, shall we not continue to confess? Yes, indeed; confess always, for you always have reason to confess.”[iii] Christians should repent in this life so that when Christ comes in glory he comes not as their judge but as their friend.[iv] Since she is established on the confession of Peter, who eventually betrayed Christ, on this side of heaven the Church always contains a mixture of weeds and wheat (Mt 13:24–30).[v]

But, marvelously, in the garden of God, weeds today may become wheat tomorrow. Thus, Augustine urged tolerance with sinners in the Church: “We must live tolerantly among bad people, because when we were bad ourselves, good people lived tolerantly among us. If we remember what we were, we shall not despair of those who are now what we were then.”[vi]

But rather than a passive tolerance that ignores the self-destructive behavior of unrepentant sinners, Augustine urged Christians toward an “active tolerance” that patiently forbears with sinners while participating in Christ’s work of converting hearts toward reconciliation. Augustine saw this active tolerance imaged especially in the raising of Lazarus, which he frequently chose for the Gospel reading at Mass.[vii]

Augustine began with the moral meaning of Lazarus’ death. Sin causes spiritual death, but habitual sin causes a death that “stinks” and from which one doesn’t easily recover:

But if habit too is added to the [sinful] deed, you are now stinking, and overlaid, as it were, by the massive stone of habit. Christ though, doesn’t turn his nose up at you even in this case, he’s quite able even now to raise you up; but he sheds tears . . . So those, then, who are in the grip of a sinful habit are suffering a kind of violent oppression, and Christ has to grunt and groan in order to raise them up.[viii]

What’s more, some temporal effects of past sin endure even after forgiveness—Lazarus comes out from the grave like one forgiven and brought back to life, but bandages and cloths still bind him; just so, old habits of sin and addiction may still bind a person after sacramental reconciliation:

Take away the stone . . . How could he possibly rise again, unless the dead weight of a sinful habit were removed? Cry out loud, all of you [Christian faithful], restrain them, scold them, accuse them, remove the stone. When you see such people, don’t spare them; you’ll find it hard work, but you are removing the stone.[x]

Through fraternal correction and “tough love,” Christians “remove the stone” of sinful habit. Likewise, with Christ’s command, “unbind him,” in Latin: solvite (you [plural] loose him), Christians help loose (unbind) the enduring effects of sin through holiness, prayer, and penance.[xi] That which Augustine experienced in his own life through the “active tolerance” of his mother he saw illustrated in the raising of Lazarus. Joined to Christ as his Body, the Church is made holy and also shares in Christ’s sanctifying work for others:

My brothers and sisters, I am speaking to you, call them [to conversion] by dove-like moaning, not by wrangling; call by praying, call by encouraging them, let them understand from your love that you grieve for them. I have no doubt, my brothers and sisters, that if they see your sorrow for them they will be confounded and will thus be restored to life.[xii]

Just like God chose to save us through the instrumentality of Christ’s sacred humanity, so also he chooses to involve the Church in his work of salvation. Despite sinners in her midst, the Church is holy and an instrument of sanctification because she shares in Christ’s holiness. As members of Christ’s Body, the holy Church labors for the salvation of our brothers and sisters because Christ has deigned to make us sharers in his saving work.

Fr. Pieter van Rooyen was ordained as a priest for the Diocese of Lansing in 2010. In 2017, Fr. van Rooyen completed a Doctorate in Sacred Theology at the Pontifical Lateran University in Rome. He is pastor of St. Joseph Catholic Church in Ypsilanti, MI, and Director of Graduate seminarians and Assistant Professor of Theology at Sacred Heart Major Seminary in Detroit.

[i] I am indebted to Fr. Joseph Carola, S.J. for his insights into Augustine’s theology of Christ’s saving work. See Joseph Carola, Augustine of Hippo: The Role of the Laity in Ecclesial Reconciliation (Rome: Pontificia Universitá Gregoriana, 2005).

[vii] Before the advent of a fixed Sunday lectionary, Augustine could pick the Scripture each week for Mass. A parenthetical exhortation to his audience to listen shows that this Gospel was one of his favorites: “It’s perfectly reasonable for us too to go back over what we have been regularly in the habit of saying about [the raising of Lazarus] . . . after all, this reading is repeated in your ears much more frequently than my homily on it . . . So then, listen please.” Augustine, Sermon 139.1, in Sermons (94A–147A) on the New Testament, trans. John E. Rotelle, (Brooklyn, NY: New City Press, 1992), 400.

[xi] “Therefore Christ says to the ministers of his Church, through whom [his] hand is laid on penitents, loose him, let him go.” Ibid.

This article originally appeared on pages 10-11 in the print issue.

A Return to the Kerygma: The Path to Renewal
By Chris Stefanick
Free If you find yourself in a fight, your extremities get cold. Your adrenaline kicks in and blood rushes to your core to pump your heart, support your lungs, and power your muscles so they can keep you alive. Moments of crisis are signals to get back to the heart of things. This isn’t only true of your body but of any institution. If a business is END_OF_DOCUMENT_TOKEN_TO_BE_REPLACED
Why Beauty Matters for Catechesis and Catholic Schools
By Dr. Roland Millare
In modern culture, relativism reigns supreme. Consequently, the transcendentals of truth, goodness, and beauty no longer seem to transcend beyond the subjective whims of every autonomous individual self. Truth is a matter of one’s opinion. Goodness is relative to each person. Beauty is a matter of personal preference. Catechists and Catholic END_OF_DOCUMENT_TOKEN_TO_BE_REPLACED
Inspired Through Art: Mass of St. Gregory by Diego de la Cruz c. 1490
By Linus Meldrum
The Mass of St. Gregory depicts a miracle in the life of Pope St. Gregory the Great, who died in Rome on March 12 of AD 604. According to tradition, he and others experienced the appearance of Jesus as the pope celebrated a particular Mass. It is considered a eucharistic miracle because of the circumstances surrounding the event. We learn of this END_OF_DOCUMENT_TOKEN_TO_BE_REPLACED