Authored by Dr. James Pauley in Issue #6.4 of Catechetical Review 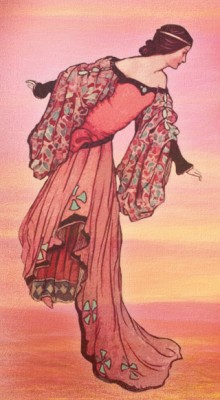 One of my favorite short stories is George MacDonald’s “The Light Princess.” It tells the story of a princess whose not-so-amiable aunt casts a spell upon the girl at her baptism. The spell alters the usual law of gravity in relation to the princess, causing her to float uncontrollably in the air (can you imagine the trouble this might cause?). From this moment on, the princess’ temperament matches perfectly her lack of gravity. She seems incapable of taking any bit of life with seriousness, laughing irrepressibly at most everything. This probably sounds therapeutic to those of us living through these troubling times, but her endless laughter and giggling wears on her relationships, so that very few in the kingdom can put up with her.

One day, the princess makes a delightful discovery: swimming! When she swims, she finds that gravity somehow re-applies itself to her—and much like you and I would love the sensation of being able to fly, our princess finds the sensation of un-flying through the water to be the greatest pleasure. Her aunt learns of her joy and promptly connives to empty the lake of its water, which is the life source of the kingdom. This unfortunate turn causes the princess to collapse into a truly unprecedented grief.

The lake drains empty. At the very bottom, a loyal subject discovers a golden plate with this inscription: “Death alone from death can save. Love is death, and so is brave. Love can fill the deepest grave. Love loves on beneath the wave.” The verse’s meaning is deciphered on the reverse side: “If the lake should disappear, they must find the hole through which the water ran . . . The body of a living man should alone stanch the flow. The man must give himself of his own will; and the lake must take his life as it filled. Otherwise the offering would be of no avail. If the nation could not provide one hero, it was time it should perish.”[1]

The king advertises far and wide for one man willing to sacrifice himself for the sake of the kingdom and for the princess (kings, apparently, are too important to make these sacrifices themselves). No one steps forward. Until one day someone does. A prince from a distant kingdom, the very young man who had introduced the princess to swimming had grown to love her. He offers himself for this task, but with one condition: that the princess sit with him and look into his eyes as he awaits his end. The very next day, the royal entourage escorts the prince to the lake and the princess accompanies him to the very deepest part. The prince stands in the hole but this isn’t enough. He proceeds to bend at the waist, putting his arms also into the hole, and only then in this contorted position is the opening sealed. The water begins to trickle and steadily rise.

Satisfied that the deed will be done, the self-absorbed king and royal entourage leave the lake in order to begin feasting over the return of the water. And the light princess, true to earlier form, becomes ecstatic over the rising water, forgetting the prince. She dances, splashes, laughs with expectation, until the prince gently reminds her of the king’s promise that she would remain with him and look into his eyes. She grudgingly does so, eagerly anticipating the rising waters.

How does this story end? You’ll have to read the story yourself to find out. George MacDonald, a believing Christian (and inspiration to C.S. Lewis), fixes the reader’s gaze on the importance of sacrifice to love and to the continued existence of the world.

Loving self-sacrifice should also be central to the life of the Catholic family. The Catechism puts it this way:

It is here that the father of the family, the mother, children, and all members of the family exercise the priesthood of the baptized in a privileged way . . . Here one learns endurance and the joy of work, fraternal love, generous—even repeated—forgiveness, and above all divine worship in prayer and in the offering of one’s life. (1657)

The cornerstone of the Catholic family as a domestic church is the One Sacrifice, wrought for us all, so that we might enter into an eternal union. Rooted in the Sacrifice of the Mass, offering our own lives as a loving sacrificial gift to God and to one another is the essence and purpose of family life, intended by God as a school of loving sacrifice. Some might scoff at the ideal amidst a broken landscape. But the ideal is essential to hold up so that we all might have a goal for which to strive, a beacon that calls us forward.

Dr. James Pauley is Professor of Theology and Catechetics and author of the new book, An Evangelizing Catechesis: Teaching from Your Encounter with Christ.

This article originally appeared on page 5 of the printed edition. Illustration of “The Light Princess” on free audiobook, courtesy of etc.usf.edu/lit2go/ books.

Editor's Reflections: Toward a Eucharistic Revival
By Dr. James Pauley
Free The Feast of Corpus Christi last month was a momentous event in the life of the Church in the United States. The celebration of this liturgy begins a Eucharistic revival, a period of historic importance that will culminate in a National Eucharistic Congress in Indianapolis in the summer of 2024. The need for “revival” in relation to the Eucharist END_OF_DOCUMENT_TOKEN_TO_BE_REPLACED
The Spiritual Life: How the Eucharist Catechizes about the Meaning of Life
By Bishop Andrew Cozzens
Free The United States Conference of Catholic Bishops is currently undertaking a Eucharistic revival. The idea for it began in 2019 when the bishops decided that we needed to respond to the moment of crisis in belief in the Eucharist in which we find ourselves—not only the discouraging results of the 2019 Pew study that reported that less than 30 END_OF_DOCUMENT_TOKEN_TO_BE_REPLACED
The Real Presence of Jesus Christ in the Eucharist
By Brian Pedraza
Free The Real Presence of Christ in the Eucharist should be numbered among the most kerygmatic of the Church’s doctrines. Here is where the Son of God, who out of the immensity of his divine love became incarnate, has chosen to dwell amongst his people until the end of time. Here is where divine charity makes itself available to the human heart. Here END_OF_DOCUMENT_TOKEN_TO_BE_REPLACED