Authored by Archbishop Rino Fisichella in Issue #34.3 of The Sower

An Enchiridion of texts for the New Evangelisation has been prepared by the Pontifical Council for the Promotion of the New Evangelization.  Here we present the introduction to this invaluable collection by Archbishop Rino Fisichella (Vatican City, 29th June 2012). 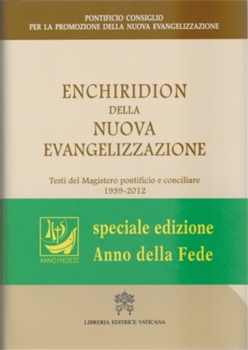 When, on the 9th June 1979, at the sanctuary of Mogila in Nowa Huta, Blessed John Paul II used the expression “new evangelization” for the first time, he may not have foreseen the great movement that would be set in motion.  Before the Cross that signified the first blossoming of Christianity in those lands, his heart whispered these words to him. He said that from that Cross that “on the threshold of a new millennium”, in “new times” and in “new conditions of life”, a “new evangelization” must begin.  In the twenty-seven years of his pontificate that intuition progressed slowly but inexorably.  With this perspective, under the same prophetic impetus, Benedict XVI instituted the Pontifical Council for the Promotion of the New Evangelization on September 21st, 2010.  At the beginning of his Apostolic Letter, Ubicumque et semper, he wrote: “… the Church … ever since she received the gift of the Holy Spirit on the day of Pentecost (cf. Acts 2:14), has never tired of making known to the whole world the beauty of the Gospel as she preaches Jesus Christ, true God and true man, the same “yesterday and today and forever” (Heb 13:8), who, by his death and Resurrection, brought us salvation and fulfilled the promise made of old. Hence the mission of evangelization, a continuation of the work desired by the Lord Jesus, is necessary for the Church: it cannot be overlooked; it is an expression of her very nature … Making my own the concerns of my venerable Predecessors, I consider it opportune to offer appropriate responses so that the entire Church, allowing herself to be regenerated by the power of the Holy Spirit, may present herself to the contemporary world with a missionary impulse in order to promote the new evangelization.”  Changed cultural, social and ecclesial conditions always demand a new way of preaching the Gospel so that those touched by the Word of God are enabled to change their lives and begin the journey of faith following in the footsteps of those who have become disciples of the Lord.

There is no shortage of questions regarding the new evangelization. Some have asked themselves if it is necessary to use this expression, which may appear to be something different from mission the Church has always exercised in the course of her two thousand year history.  Others have viewed it as a judgement on certain pastoral practices of past decades that have not always proved to be effective or fruitful. Others still have realized the urgency of a conversion at a pastoral level so as to give voice to the Spirit who brings about an ever renewed Pentecost.  Faced with so many questions, it should not be difficult to show how important the use of the adjective “new” is in Sacred Scripture.  The title “new” Testament is among the first that strikes one and raises the question as to how this is applied when one is referring to the “Word of God”; which as such is neither “old” or “new” as it is the Word that from the beginning and forever is new in every age, spreading through the whole earth and expressing itself in every language.  In the same way, one speaks of a “new covenant” (Lk. 22: 20; 1 Cor. 11: 25), a “new Spirit” (Rom. 6: 4) and a “new commandment” (Jn. 13: 34).  There is no lack of references to the “new man” (Eph. 2: 15; 4: 24), “new life” (Rom. 7: 6) and a “new name” (Ap. 2: 17).  And does one not read of a “new Jerusalem” (Ap. 3: 12; 21: 2), a “new song” (Ap. 5: 9) and of a “new heaven and a new earth” (2 Pt. 3: 13)?  As we can see, in Christ all things become new and retain the imprint of the newness of his revelation.  His Gospel, therefore, is always new while remaining unchanged.  The “new” to which we refer is verified time after time.  It is not by chance that the Greek Bible felt the need to distinguish between néos and kainós, so as not to fall into error.  Since modern languages do not have the same precision, this imposes upon us the need to also clarify terms in speaking about the new evangelization. We are seeking to understand, therefore, if what we are speaking about is something that has appeared for the first time or if instead, as is the case here, it makes reference to an attitude of renewal.

For his part, John Paul II happily synthesized the meaning of these words: “New in ardour, new in methods, new in its expression”.  Benedict XVI speaking for the first time to participants in the Plenary Assembly of the Pontifical Council for the Promotion of the New Evangelization, added: “There is a dynamic continuity between the proclamation of the first disciples and ours. Throughout the centuries, the Church has never ceased to proclaim the salvific mystery of the death and Resurrection of Jesus Christ, but today that same message needs renewed vigour to convince contemporary man, who is often distracted and insensitive. For this reason, the new evangelization must try to find ways of making the proclamation of salvation more effective; a proclamation without which personal existence remains contradictory and deprived of what is essential.”

One of the first tasks given to the Pontifical Council for the Promotion of the New Evangelization was to prepare a resource which would be able to present the diversity of meaning of this expression “new evangelization” in all its richness.  Such a task has led to this Enchiridion which aims to make clear the development and import of the new evangelization.  Its goal, above all, is to show how this is in full continuity with previous teaching.  For this reason, the collection of texts begins with Pius XII who, while not using the expression, nevertheless indicated this path as the way to follow in the difficult period he was already outlining at the end of his pontificate.  Specific studies will be able to show how the development of successive teaching proceeds, especially with the Second Vatican Ecumenical Council and Pope Paul VI, linking the new evangelization to the mission of the Church facing the challenge of secularism.  At the same time, a resource like this Enchiridion will be able to highlight in a clear way the significant progress that emerges during the pontificate of John Paul II.  For practical reasons, we decided to include the teaching of Benedict XVI up until 19th April 2012, the seventh year of his pontificate.  The follow up to the XIII Assembly of the Synod of Bishops on the New Evangelization for the Transmission of the Christian Faith, will in the future allow a sequel to this Enchiridion enriching it with further teaching in this regard.

We are conscious of the need that this text be accompanied by a theological and hermeneutical explanation, capable of contextualizing individual passages in order to establish the difference between various magisterial interventions.  The main purpose of the Enchiridion, nevertheless, remains its pastoral usage.  We have considered how useful a similar resource would be for Bishops, priests, deacons, catechists and all those in the world of the new evangelization – one so varied in experience – who intend to make the conciliar teaching and that of the Popes the foundation for an effective and lasting pastoral activity.  In following the historical development of the contributions to the Enchiridion one encounters its interior logic made evident in their progressive maturation.  The Index of Subjects on the other hand, allows one to have immediate access to the contents and, in some way, facilitates a more systematic reading of the related themes.  In order to offer the reader the immediate context of the expressions used, it is anticipated that a brief introductory comment for each of the individual passages will eventually be made available.  For those who wish to locate the sources that are given in the notes, they are directed primarily to official source of the Acta Apostolicae Sedis. Where this was not possible for reasons beyond our control, the reader will be able to refer to the Collection of Teachings (Insegnamenti) of the respective Popes.  For the most recent texts, we have made reference to the official daily paper of the Holy See, L’Osservatore Romano.

The Pontifical Council for the Promotion of the New Evangelization has willingly undertaken the preparation of this Enchiridion.  It became clear from the beginning that is was important to have the assistance of a team of specialists who were valuable collaborators and who merit our praise for the work completed and for the specialized contribution they have made to this publication.  In particular we have the duty to thank Professors Carmelo Dotolo, Don Gerardo Galetto, Giuseppe Occhipinti, Fr. Gianluigi Pasquale OFM Cap.; Doctors Fr. Nicola Tovagliari LC and Marco Romano.  This work is also the fruit of their commitment to the New Evangelisation.  Particular thanks should go to Fr. Edmondo Caruana O Carm. for his collaboration in the preparation of this text.

We hope that this Enchiridion might become one of many instruments of the New Evangelisation.  May the enthusiasm of the new evangelizers, which day after day spreads to an ever great number of believers, find in these pages the support needed to provide the reason for their untiring commitment to proclaiming Jesus Christ, who is the same ‘yesterday, today and forever’ (Heb. 13:8).

This article is originally found on pages 38-39 of the printed edition.