The Spiritual Life: God, Who are You?

Authored by Róisín O'Rourke in Issue #7.2 of The Catechetical Review 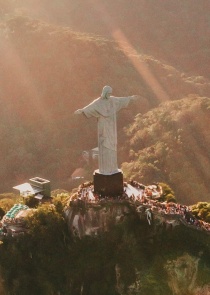 Have you ever wondered why Jesus’ disciples found it so difficult to grasp his true identity, even after living so closely with him and directly witnessing his great works? For instance, he quells a furious storm purely by the power of his words, and—though certainly captured by a great sense of awe—they still question: “Who then is this, that even the wind and the sea obey him?” (Mk 4:41). Revealing, however, is Jesus’ response to Peter proclaiming him “the living Son of God”: “Blessed are you, Simon son of Jonah! For flesh and blood has not revealed this to you, but my Father in heaven” (Mt 16:17). Peter’s human powers of reason had not brought him to this proclamation; if God had not chosen to reveal himself at that moment, Peter could not have said what he did.

There is so much about God, in fact, that we cannot know by means of our reason alone. God chooses to reveal himself and invites each of us to a response—not just giving a cursory answer, but responding right from the depths of our being. There can be a tendency to think of “stepping out into the deep” purely in the sense of mission; yet, it points to something deeply interior as well. God is ultimately mysterious, not because he is unknowable or his truth unreasonable, but because he is beyond our wildest imaginings. He is infinite and we are finite. He is perfect; we are flawed. Certainly we see St. Paul clearly acknowledging our limited ability to perceive when he compares our earthly existence to eternal life in heaven: “For now we see in a mirror dimly, but then face to face. Now I know in part; then I shall understand fully” (1 Cor 13:12). Relatedly, St. Augustine plainly and compellingly asserted, “If you understood him, it would not be God.”[1] Even St. Thomas Aquinas, close to the end of his life, admitted, “Everything I have written seems to be as straw in comparison with what I have seen.” [2]

At one time, God’s response to Moses at the burning bush, “I am who I am”, sounded like unnecessarily complicated grammar to me. Yet in my early twenties, God drew me out into the deep, into a real “desert place” spiritually, where, stripped of all the false gods in my life, I contemplated for the first time the reality of a world without God. And it was utterly incomprehensible. Only then did I realize that if God withdrew his love from creation for even the tiniest fraction of a millisecond, we would all simply cease to exist. He is the great “I am”—utterly transcendent to all he has made, yet also at its very heart, sustaining it at every moment. We owe every moment of our existence to him; everything does. Do we dare recognize the sheer enormity of this?

I appreciate now that God drew me into that desert place for a purpose: to shatter the edifice of my shallow belief. I had never properly considered the reality of who God was before that point; neither did I appreciate the value of doing so.  I found myself suddenly grappling with huge questions: Is he real? Can all this be true? There was even a deep-rooted fear that I was merely seeking comfort through belief. Yet, painful as that experience was, I firmly believe that God was holding me in the palm of his hand throughout it because even while doubts raged I found myself mysteriously drawn to praying the rosary, to attending my first Youth 2000 retreat, and discerning a gap year faith formation program in Knock, Ireland’s national Marian shrine. My mind was wrestling with God, to be sure, but my soul certainly wasn’t. Then that Christmas, the gift of faith which had been temporarily dormant in my soul, began to slowly unfurl in my heart. God helped me realize that trying to “get” him totally is like a little child at the seashore trying to pour the ocean into his tiny bucket. Ultimately, to fall in love with him is to surrender to deep mystery. It is to step into the deep.

Draw us deeply into your great mystery

So that filled with you, our lives may bring you glory!

Through Christ our Lord,

Róisín O'Rourke is an education and psychology graduate from Co. Leitrim in the West of Ireland. Currently working as a primary school teacher, she also serves on the leadership team of Youth 2000 Ireland and writes weekly faith formation posts for their social media platforms.

This article originally appeared on page 20 in the print edition.