Authored by Msgr. Paul J. Watson in Issue #35.3 of The Sower

The Second Vatican Council took place in Rome during three autumnal sessions between 1963 and 1965.  The outcome of the Council was a set of sixteen documents that are the result of the deliberations of the Bishops in union with the Pope. Pope John Paul II described the Council as “a providential event” that has made “a significant contribution to the… new springtime of Christian life…if Christians are docile to the action of the Holy Spirit.”[i] Many requests have been made by our readers for this article and organizational chart of the documents of Vatican II to be reprinted.  The editorial staff of The Sower is happy to make this available once more.

In preparing for the Great Jubilee and new Millennium, the Pope called for an examination of conscience on the part of Catholics. One element of this was to consider “the reception given to the Council, this great gift of the Spirit to the Church.”[ii] Perhaps the Pope had a sense that, nearly forty years after the Council, there were still a great many in the church who did not really know what the Council achieved and taught.

It is time now for a return to the documents of the Council. So often we have received teaching about the Council in a second-hand way. We feel that we may not be sufficiently equipped to read the texts of the documents ourselves. The truth is that it is always good to go to the sources. In the past some held the same view about the Sacred Scriptures. However, today many are reading the Scriptures and finding great nourishment from them. Similarly, in the Catechism many are finding that their minds are being opened to the riches and the wonderful harmony of the Catholic faith.

In order to properly understand the scope of the Council, it would be perhaps helpful to see an overview of the way that the documents fit together and relate to one another. There is a logical structure and order to the sixteen documents. A first step might be to get an insight into this structure in order to “see the wood for the trees”.

The notion that there is a logical structure and coherence to the documents is first hinted at by the descriptions given to the various documents. Each document is described in one of three ways: as a constitution, a decree or a declaration. These three titles differentiate the relative significance of each document and the relationships between them. The more foundational constitutions and the more specific decrees give us a deeper understanding the mystery of Christ and his Church, while the declarations speak directly to all people of the world.

The central document and key to all of the teachings of the Vatican Council is the Dogmatic Constitution on the Church. At the heart of this teaching is the vision of the Church as a Sacrament. The church is the sacramental presence of Christ and his saving work in the midst of the world. This sacramental nature comes about through union with Christ established principally in the Sacrament of Baptism. This union matures through growth in holiness. The universal call to holiness is the central concept of the whole document. Christ continues his saving work—the work of redemption—through the action of the Church today! This can happen because Christ has united himself to those who are his followers and through the gift of the Holy Spirit, has ensured that the life and activities of the Church and its members continue to make him present in the world.

The Pastoral Constitution on the Church in the Modern World develops the more general teaching on the nature of humanity and of human society and the urgent question and problems of the day.

You will see from the diagram that those documents that are described as constitutions form the central teaching of the Vatican Council. Two of these—the Constitution on the Sacred Liturgy and the Constitution on Divine Revelation—can be described as foundational. Along with the two constitutions on the Church, they form the heart of the council’s teaching on the mystery of the Church. Divine Revelation is the source of the Church’s life and teaching. The Liturgy is both the place where the Church most clearly expresses and communicates what she is and at the same time where she draws nourishment for her mission from the Paschal Mystery she celebrates.

The remaining twelve documents can be grouped into three sets. One set will expand the Dogmatic Constitution on the Church from the point of view of its structure and membership—Bishops, Laity, Priest, and Religious. Another set will expand the constitution in relation to the Church’s mission in the world—Missionary Activity, Training Priests, Social Communication and Christian Education. The third set of three will describe the Church’s relations with the world religions—the Eastern Church, other Christian Churches, the other World Religions including the Jewish Faith and the Declaration on Religious Liberty.

The documents of the council have a shape and structure. The diagram is offered to help you understand this shape and the way that the various documents relate to one another and to the central Constitutions.

This article was originally on pages 42-43 of the printed edition. 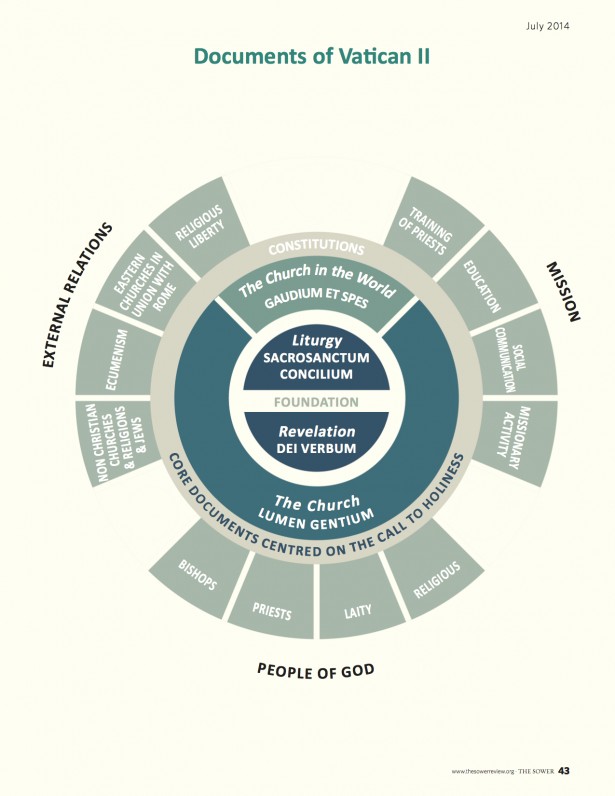 Editor's Reflections: Toward a Eucharistic Revival
By Dr. James Pauley
Free The Feast of Corpus Christi last month was a momentous event in the life of the Church in the United States. The celebration of this liturgy begins a Eucharistic revival, a period of historic importance that will culminate in a National Eucharistic Congress in Indianapolis in the summer of 2024. The need for “revival” in relation to the Eucharist END_OF_DOCUMENT_TOKEN_TO_BE_REPLACED
The Spiritual Life: How the Eucharist Catechizes about the Meaning of Life
By Bishop Andrew Cozzens
Free The United States Conference of Catholic Bishops is currently undertaking a Eucharistic revival. The idea for it began in 2019 when the bishops decided that we needed to respond to the moment of crisis in belief in the Eucharist in which we find ourselves—not only the discouraging results of the 2019 Pew study that reported that less than 30 END_OF_DOCUMENT_TOKEN_TO_BE_REPLACED
The Real Presence of Jesus Christ in the Eucharist
By Brian Pedraza
Free The Real Presence of Christ in the Eucharist should be numbered among the most kerygmatic of the Church’s doctrines. Here is where the Son of God, who out of the immensity of his divine love became incarnate, has chosen to dwell amongst his people until the end of time. Here is where divine charity makes itself available to the human heart. Here END_OF_DOCUMENT_TOKEN_TO_BE_REPLACED